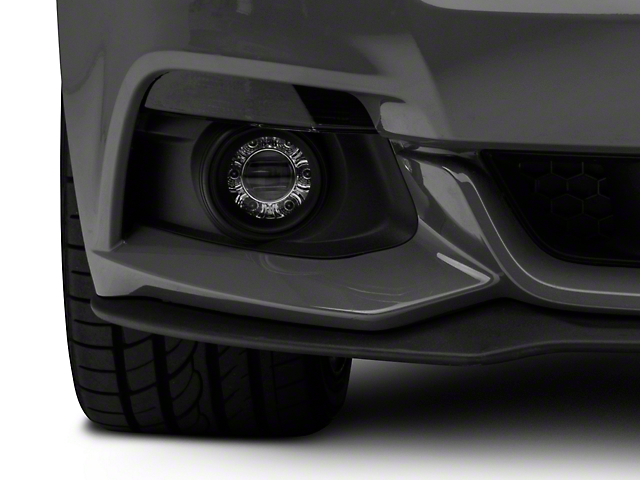 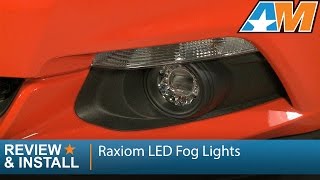 Hey, guys, Adam here with americanmuscle.com. Today I'm bringing you a quick overview and installation of the Raxiom Clear LED Fog Lights, fitting all 2015 and newer Mustangs with factory fog lights. So, in this video, I'll be going over the styling and appearance you can expect out of the Raxiom Clear LED Fog Lights, as well as the materials and construction. I'll top the video off with the installation, and I'll also let you know upfront this one is gonna require a very minimal amount of splicing. But in my book, it's still going to get the one out of three wrenches on our difficulty meter.The Raxiom LED Fog Lights in clear I have with me today will be for any 2015 or newer Mustang owner who has the factory fog lights installed. But are looking to swap them out for a set of clean and crystal clear lenses, over a bright set of very unique LED lighting. So, as far as the options go for your fog lights replacement this will be a direct fitment as a replacement for your factory OEM option, and really gives it a very unique aggressive look as opposed to the stock appearance.Now, with that said this will feature six LEDs all around the ring, which of course sit on a very clear lens giving you that crystal clean look, and of course a black housing with OEM quality materials which I'll touch on in just a bit. Now, aside from the very unique styling of the six LEDs you see around the circle, what sets us apart from the other aftermarket options on the site. Everything else that will be a fog light replacement is the fact that these Raxiom options can actually work in conjunction with your daytime running lights. Now, aside from those six LEDs around the circle, the main one right in the middle will actually act as a halo styling with a bright white LED, that will splice directly into your DRLs which of course will be thanks to the wiring here. Very simple job which I'll touch on a second, but of course that will add that little bit of extra styling and uniqueness to the setup, and of course, aside from the DRLs you'll get the six LEDs working with that. As far as materials and construction goes here, you don't have to be worried about this one because this Raxiom option uses the exact same quality materials as your factory OEM option does. And of course, you get the black housing, the crystal clear lens for really look. You get the chrome insides here which have the six LEDs around the edges, the seventh one directly in the middle to work in conjunction with your daytime running lights. All this is backed by Raxiom's full two-year warranty, and it's all 100% DOT approved. So, as the story goes for some of the products out there, you may love it, you may hate it. Some people might not like that six LED design here, and quite frankly I think I might be one of them. I'm not too big of a fan of the six LEDs. I am a big fan, however, of the daytime running lights splicing factor and the halo design that Raxiom implements in a lot of their lighting.Now, with that said if you are one of the guys out there who is interested, pick this one up for just shy of 300 bucks. A pretty decent price tag but it is to be expected with the Raxiom products here. And of course, it does come with that two-year warranty. So, there is a lot of bang for your buck, especially with the OEM quality materials. Shifting gears over the installation portion of the video, like I said in the very beginning, this is a fairly simple job, anybody can take care of with a little bit of time in the driveway at home. Does require a minimal amount of splicing but it's so minimal I am still going to give this a one out of three wrenches on our difficulty meter. Then again if you're not comfortable doing a wiring job no matter how simple it is, there's no shame in taking it to a professional to get this done properly. Now, if you are tackling the job yourself, this is something I believe you can do with a little bit of time. I'd say about two hours in the driveway at home considering that splicing is involved. Once that's taken care of after you follow the directions for that, it will be a pretty much direct plug and play connection from that point on.With that said, the simple ratchet and socket set will be needed to remove your factory fog lights, but once you swap them out, all the wiring is taken care of here for you. Just to wrap things up here, if you're the owner of a 2015 or newer Mustang and you have factory fog lights installed, and you're looking to swap those out for a more unique set up and something that can actually work in conjunction with daytime running lights. You might want to check out the Raxiom Clear LED Fog Lights which will be available right here at americanmuscle.com.

DRL Fog Light Combo. There's nothing like getting deals that are a two for one special. Same holds true for this set of two LED Fog Lights by Raxiom. Designed as a fog light and daytime running light (DRL) combo, this upgrade will look great no matter the time of day. Longevity and brilliance are the name of the game with these Fog Lights, featuring long lasting, bright LEDs to bring increased visibility to your 2015-2017 Ford Mustang.

Quality Construction. Featuring crystal clear lenses, these Fog Lights by Raxiom utilize durable black housings and long lasting LED technology. The solid center LED delivers superior lighting when the fogs are turned on. Six LED bulbs form a halo when the DRLs are activated and look killer both during the day and at nighttime.

DOT Compliant. Raxiom’s Daytime Running Light / Fog Light Combo Kit not only improves the appearance of your Mustang, but they also meet or exceed the strict guidelines set forth by the U.S. Department of transportation (DOT) making them legal for street use under compliance# .

Straight Forward Install. Designed as a straight forward installation, these Raxiom Fog Lights plug right into the factory wiring harness for a quick replacement for your factory fogs. The DRLs will require some minimal wiring to function properly. All necessary hardware and wiring extensions are included, along with detailed instructions.

Application. This set of two Clear LED Fog Lights by Raxiom are specifically designed for 2015-2017 Mustangs, including V6, GT, EcoBoost and GT350 models that are already equipped with factory fog lights.

For US Mustangs Equipped w/ Factory Fog Lights - will not function properly on Mustangs sold in the EU or UK.