Find Throttle Body and Carburetor for your Mustang 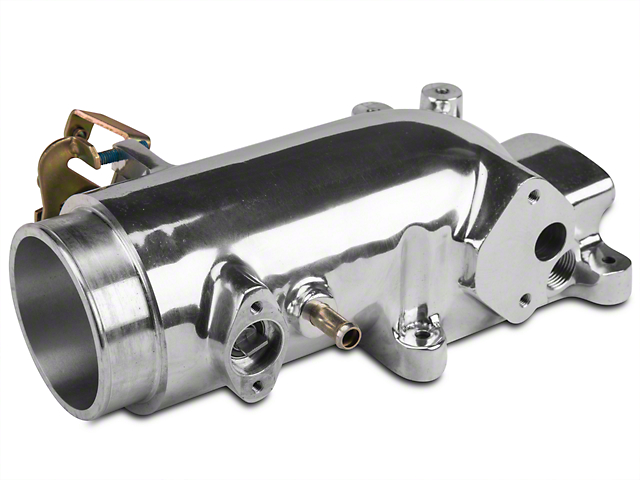 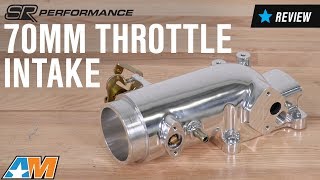 So SR 70-millimeter polished intake that we've got here today is gonna be a good option for any in-line [SP] two-valve GT owners out there that are after high flow intake plenum and throttle body all in one. It's gonna give you a small bump in horsepower, it's gonna look great under the hood, but most importantly, it's not gonna burn a hole in your pocket. A great thing about this is that it's going to install pretty easily with basic hand tools. For that, you're gonna be looking at an easy one out of three wrenches in our difficulty meter here, about 30 minutes to an hour job, and I'll have a little bit more coming up for you on that later. So throttle intakes are a great way to force more air into your Mustang's motor, but this always doesn't translate to more power. Now, you've probably seen some other throttle body or intake options out there, and the 70-millimeter is gonna be for a stock or a mild bolt-on car. So the bigger options like 73 or 75 are gonna be for heavily modified cars, something that's gonna be running forced induction. Now, larger intakes can actually bog down your motor, and it's gonna be like the equivalent of you or me trying to take a drink or a sip out of a fire hose. So if you're the daily driver that has a couple of bolt-ons, this is gonna be the right mod for you. This thing doesn't require tune either, which is always nice, but a general rule of thumb here says that you should probably expect to be seeing high single digit to low double digit gains, but paired with a tune, those numbers are gonna be fluctuating. So at this point you're probably asking yourself, "Well, what's the difference between this throttle intake and a standalone throttle body?" This is a two for one deal, for lack of a better term, because you're getting a built in throttle body and a larger plenum at the same time. Now the bonus with this is you're pushing the right amount of air into your motor that you might with a throttle body of the same size or stock plenum. And not only that, this thing just looks that much cooler. The plenum's rounded off, which will look great with a polished cold air intake and you can actually see the exposed throttle control. I'm just gonna handle the butterfly valve inside, which, you know, is pretty old school and it looks cool. Now the stock intake plenums on the two valves tend to get pitted or corroded, whereas with this, you're gonna be getting a polished finish that won't fade or dull as long as you clean it up every now and then, and it's gonna help pick up some style points at local shows or get-togethers. Now in terms of the pricing here, guys, expect to be spending about 250 bucks to get this onto your car, which is a bargain, in my opinion, compared to some of the other styles out there, like Active Fab, for example, which can run upwards of about 500 bucks. Now we do have a BBK unit on site, which is gonna run closer to 300 bucks. Your main difference there is that it's just gonna have a dark charcoal finish, but it still will be made up of the same materials. Now compared to just picking up a throttle body, this is something, in my opinion, that's gonna be that much more of a viable option because you are gonna be getting that increased diameter of the throttle body, along with the addition of the plenum, which ultimately is gonna yield higher numbers. Now install-wise great things about throttle bodies or combos like this is that they install with little to no effort at all. You're looking at a basic 30 minute to an hour job with a basic socket set and an easy one out of three wrenches on our difficulty meter.So you're gonna begin by unplugging your negative battery terminal, followed by the front vacuum light and a TPS and idle air control connection. After that, remove the two bolts holding the EGR onto the back of the plenum, with the additional bolts securing the throttle cable bracket to the plenum. Once that's done, guys, undo your throttle body hose clamp, along with the five bolts that are holding the plenum to the manifold. But once that's done, guys, it's more or less just gonna be buttoning everything back up, checking your connections, making sure everything's ready to rock, and that's it.So that's gonna wrap up my quick review and breakdown of SR 70 millimeter throttle intake in the polished finish, fitting the 1996 through 2004 Mustang GT, that can be found right here at americanmuscle.com.

Application. This SR Performance 70mm Polished Throttle Intake is designed to be a direct fit replacement on all 1996 to 2004 GT Mustangs equipped with the SOHC 4.6L modular engine.

Technical Note. The SR Performance Throttle Intake is not legal for use in California or other states adopting California emission standards.