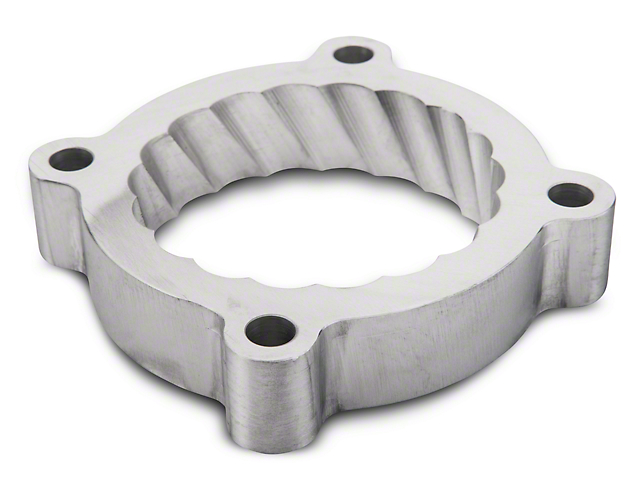 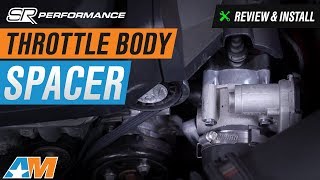 The SR Performance throttle body spacer should appeal to the 2015 and newer EcoBoost owners out there who are looking for a super affordable and very easy to install modification that, according to the gang over at SR Performance, will help add more low-end power and maybe even a little bit better fuel economy to your EcoBoost-powered Mustang. Now the no-tune required modification is gonna run you right around 50 to 60 bucks, and the simple bolt-on installation will get a 1 outta 3 wrenches on the difficulty meter from me, with a little bit more detail to come later in the video. All right, but what do you say we address the elephant in the room here first, guys, right up front, and that is the fact that there will no doubt be some owners out there who have already made up their mind on this product and think it's BS or whatever, and that's perfectly fine. However, the overwhelmingly positive reviews on this spacer from owners who have actually pulled the trigger on this part and installed it, tell a completely different story. And listen, guys, at the end of the day, here is the deal. Are you gonna install this and pick up 10 to 20 wheel? Absolutely not. But smaller gains have been reported, again in the customer review section, in addition to slightly better fuel economy. So again, I really encourage you at least in this case here more specifically, to read up on those customer reviews before buying and get some real world feedback from, again, owners who have actually installed the part. And with that out of the way, let's get into the SR spacer a little bit further. And honestly, guys, the act of adding a spacer like this is nothing new in the world of hotrodding. In fact, guys have been adding plenum spacers to carbureted setups for decades now in an attempt to increase plenum volume and ultimately just add a little bit more horsepower. Now obviously the EcoBoost power plan is the furthest thing from a high ram with a four-barrel, but the idea kinda remains the same here, increase your plenum volume by installing the spacer between the throttle body and the intake manifold to squeeze just a little bit more power out of your setup. Now the spacer in this case is from SR Performance, traditionally a value brand, and that certainly is the case with this product as it will be one of your least expensive options in the category. Now construction-wise, guys, it's gonna be extremely basic, right? Billet aluminum construction here on the surface measuring about an inch to an inch and a half in overall width, and CNC machined into the shape or the final product that you see here. Now one thing about the spacer that it has in common with the rest of the options on the site is this kinda spiral design that's CNC'd into the actual spacer itself. And according to that guys over at SR Performance, it's gonna have more of an impact with your fuel economy as opposed to adding power per se. And according to those customer reviews, again it seems to work. In fact, a lot of our customers have reported back with a measurable increase or improvement in fuel economy after the spacer has been installed. So again, definitely check out those customer reviews. And speaking of that installation, very, very simple stuff here, guys, so let's call it 1 outta 3 wrenches on the difficulty meter, maybe 30 minutes to an hour of your time depending on how fast you like to work. Tool-wise, again, simple stuff here as well, including an 8 and 10 millimeter socket, along with a flat head and Phillips head screwdriver. Now depending on your intake situation, you might need to remove that airbox first in order to gain access to the throttle body bolts. At this point, you can remove the inlet tube connected to the throttle body using your socket set or screwdriver. Next, use your 8 millimeter socket to remove the four bolts securing the throttle body to the intake manifold. With the throttle body out of the way, you can install the spacer with the O-ring facing out towards the front end of the car. Reinstall the throttle body with the supplied new bolts here which are a little longer, being careful not to overtighten. Reinstall the inlet tube in the airbox and your installation is complete. So while the gains aren't exactly going to be earth-shuttering, a lot of EcoBoost owners have had a great experience with the throttle body spacer, especially given the low price. So be sure to check one out for your ride right here at americanmuscle.com.

Better Fuel Economy. The SR Performance Throttle Body Spacer not only improves the performance of your Mustang, but with its unique “Spiral Bore” design it also improves fuel efficiency. The Spiral Bore "spins" the incoming air for improved atomization of the air fuel mixture for better combustion.

Intended for use with the factory throttle body.

Would this throttle body spacer void my warranty?

are these legal in California

I got roush intake Will this fit?

Would this improve my acceleration? 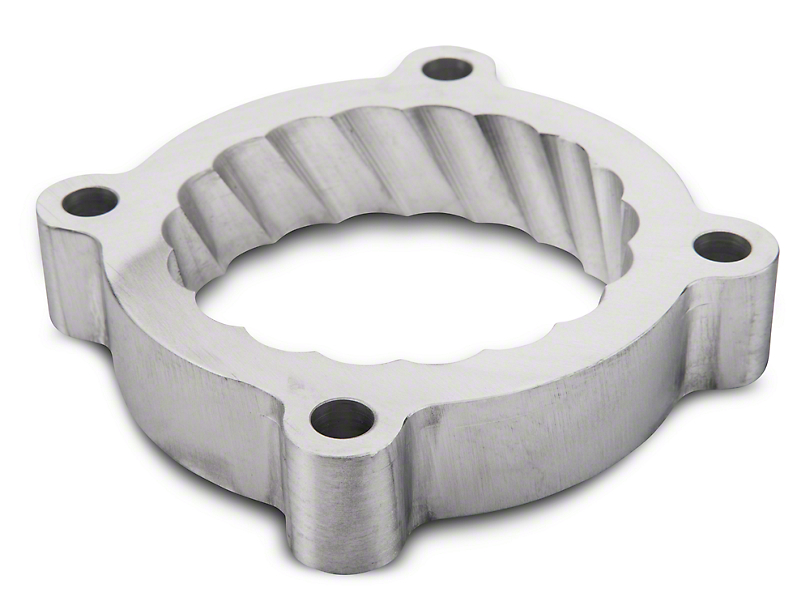