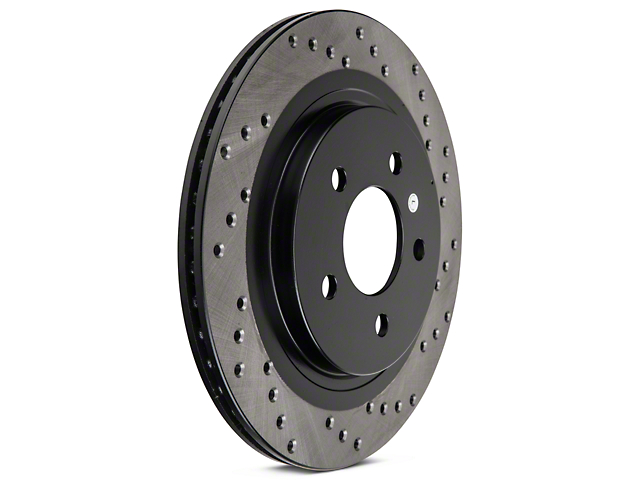 Upgraded Rotors for Your Mustang. Handling and control make a muscle car effective nearly as much as acceleration and raw power, and the tools you can use to rein in your 2005-2014 Mustang include the fast-cooling, well-vented StopTech Sport Cross-Drilled Rotors, Rear Pair. Designed to avoid brake fade, these rotors function just as well in pounding rain (the cross-drilling efficiently piping water off the friction surfaces) as in clear, sunny weather. This is a simple to install package yielding big dividends in stopping power.

Built for Pro Levels of Performance. The StopTech Sport Cross-Drilled Rotors are made to high quality standards and with full inspection, fabricated from cast iron blanks. They are vented designs for superior cooling properties. These parts also feature precision drilled holes as part of their cross-drilling, penetrating into the internal vent channels, not the solid cooling vanes. Rust-proofing is supplied in the form of black e-coating on the hats, edges, and vanes.

Enhanced Stopping Power Rotor Features. When you’re running the StopTech Sport Cross-Drilled Rotors, the clever curved design of the internal ventilation vanes works constantly to cool the metal. Their curvature creates a “hurricane effect” whereby cold air gets drawn in the middle hole and blows out through the vent channels, leaching heat out of the iron. This prevents various types of brake fade by ensuring that temperatures remain reasonable. The cross-drilling clears away material from the rotor face, including fluids, for plenty of friction and stopping power even in the midst of a torrential thunderstorm. The curved rows of drilled holes, contrasting with the shining rotor, make a powerful style statement, too.

Installs Directly. Attachment of the StopTech Sport Cross-Drilled Rotors can be carried out whether you use factory or third-party upgraded calipers, wheels, etc. Made for direct-fit replacement of the original discs, they attach quickly and easily with no modifications necessary.

Set of Two Rotors. The StopTech Sport Cross-Drilled Rotors kit is made up of (2) 11.81” cross-drilled rear rotors.

No Warranty. The manufacturer of the StopTech Sport Cross-Drilled Rotors does not cover them with any type of warranty. By obtaining these rotors you are agreeing to accept them “with all faults” and “as is,” though the vast majority are close to flawless.

No Deductibles Required. There are no deductibles required for use of this extended product warranty. If your covered part fails within the extended warranty time from, simply call the program administrator at 1-844-870-4881 for instructions before any repairs or replacements have begun. Additional contact details and instructions will be included in your confirmation email.