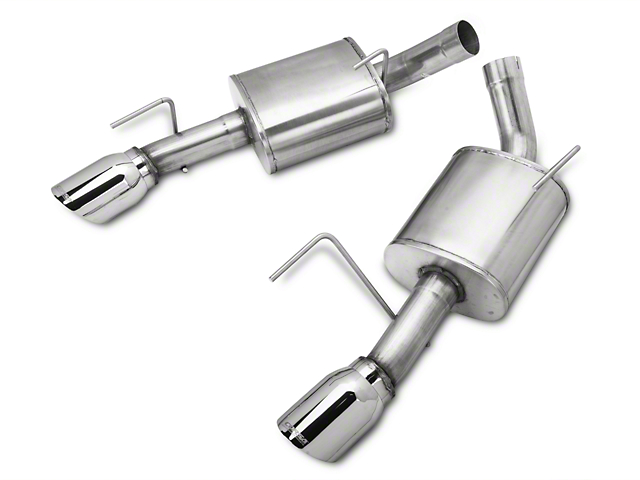 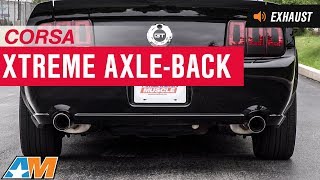 The Corsa Xtreme axle-back for the 2005 to 2010 GT Mustang is something that you should check out if you're looking for a 304 stainless steel axle-back that also happens to be one of the loudest available, but that doesn't have any drone, and if you don't mind paying extra for the Corsa name and quality. Corsa is known for producing loud exhaust systems that are high in quality with no drone, and top-of-the-line fitment and manufacturing, but they usually are on the more expensive side of things. The install for this axle-back is easy. It's gonna be a one-out-of-three wrenches on the difficulty meter. You can plan on spending an hour's time to get this installed. Corsa prides itself on its ability to provide an exhaust that gives a throaty sound under acceleration and a very deep tone at all times, and lots of volumes all the way around, without any drone in the interior. They're able to do this because they tune their mufflers. They've created what they call RSC, or reflective sound cancellation technology. This allows the axle-back to be loud under acceleration, but it eliminates the drone that you commonly get with an axle-back as loud as this one is. This is gonna be a five-out-of-five on the loudness meter, with one being a quiet upgrade and five being a very loud one. This system is one of the loudest axle-backs that we have currently available on the site, so if you're looking for loud and aggressive with no drone at all, you're in the right spot. Other than having a ton of volume with no drone, this axle-back is also made in the U.S. from 304 stainless steel. If you have a daily driver or a car that you drive a lot in all types of weather, I always recommend stainless steel, especially 304 stainless steel, since it's top-of-the-line when it comes to materials. It's gonna have the longest life and hold up the best over time. 304 stainless steel won't corrode or rust over time like aluminized steel would, or even some of the cheaper forms of stainless steel. The mufflers in the system are straight-through mufflers and they have mirror polished stainless steel tips. If you wanted a different look, Corsa offers the same system with black tips instead. And if you're thinking this is maybe a little bit too loud for your personal preference, Corsa does make a Sport axle-back that isn't quite as loud as the Xtreme here is. Like I told you guys earlier, this system is on the more expensive side when you compare it to your other options out there. You can expect to spend over the $700 mark for this axle-back. Corsa stuff tends to be more expensive because of the nicer features that this has, like the fact that it has no drone but a ton of volume, and that it's 304 stainless steel. So, if this is a little bit too expensive for you, there are a lot of options on the Product page when it comes to axle-backs for this generation. This is a bolt-on item, so you're looking at a very easy install. I'm gonna call it a one-out-of-three wrenches on the scale when we look at difficulty. Overall, you're looking at about one hour to get this all done. And, as usual, a lift would certainly make things easier for you here, but the job can be done on a jack and jack stands, as well, if you don't have access to one. This axle-back very simply bolts right up into the stock location, so you won't have to modify anything or cut anything. You're just looking at dropping your old axle-back, and the new axle-back will come with new clamps for you, so you don't have to worry about transferring the old ones over. When you go to install your new setup, it'll probably be easiest to leave everything a little bit loose until you have it all lined up, and then tighten it down. Wrapping things up here with the Corsa Xtreme axle-back, this'll fit the 2005 to 2010 GT Mustang, and you can check it out more online right here at americanmuscle.com.

View Full Transcript
Xtreme Aggressive Sound. The Corsa Xtreme axleback system is acoustically styled and engineered to give your Mustang a throaty aggressive sound under acceleration and a deep growl at idle all without interior cabin drone.

RSC™ Technology. Corsa designs their mufflers using their own patented Reflective Sound Cancellation® Technology (RSC™) to give your Mustang an aggressive sound under acceleration and a drone-free experience while cruising.

Quality Construction. Corsa Axle-back systems are manufactured in the USA from premium grade 304 stainless steel for a long life and a perfect fit. The system features two straight-through mufflers that end with mirror polished 4" Pro-Series tips, that exit in the stock location for impressive good looks.

Technical Note: Americanmuscle recommends adding the 2005+ Mustang 304 Stainless Steel Exhaust Hanger Kit from the drop down option above, to provide more strength, stability and a cleaner installed appearance. If you have a 2007 Mustang you may need the kit for correct installation.

Loved these on my 4.6. Will a Pypes x pipe cut and clamp, make a good difference? Will they quite down the idle ? Just don't want to mess with the stock cats.

My 2005 v6 mustang has a dual exhaust system installed on it. Will the corsa xtreme axle back fit on it ?

Hey, will this exhaust work with a BBK high flow cat x pipe?

Will they pass the CA smog test?

I have a 2010 mustang GT auto, with off road h pipe an roush catback. Will it still be drone free from what I have? 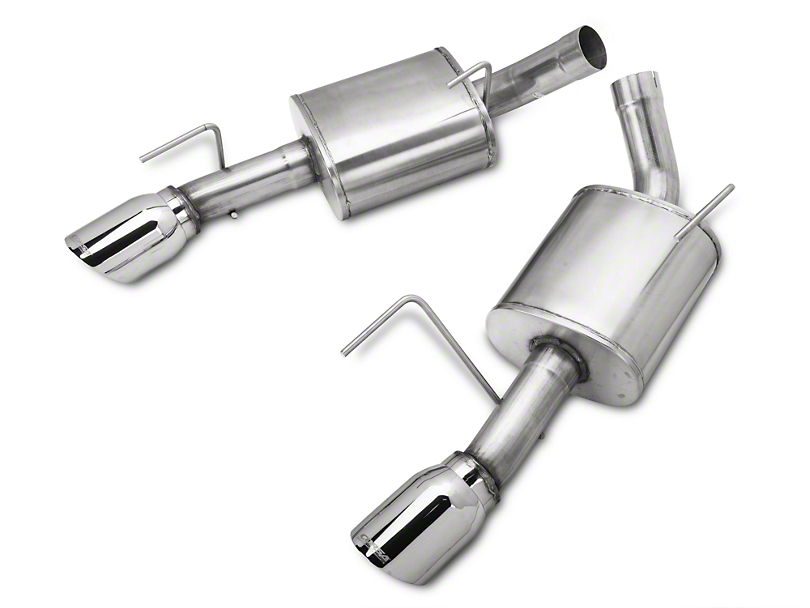