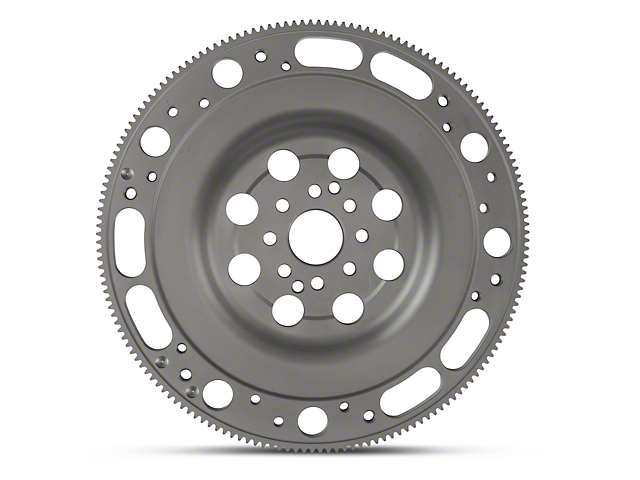 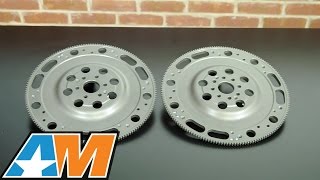 Hey, what's happening, guys? Justin with AmericanMuscle.com here, checking out these McLeod Racing 6 and 8 bolt Chromoly flywheel options available for your '96 to '14 Mustang GT. McLeod Racing, as a company, was started over 40 years ago by racers for racers. So therefore, they know what it takes to produce high-quality products that can withstand the test of time, whether it's on your bone-stock daily driver or your 3,000-horsepower dedicated drag car. Now, if you guys want to check out the full line of McLeod products here at AmericanMuscle.com, including their very popular RST and RXT dual clutch options, then be sure to subscribe to our YouTube channel, if you haven't done so already.So if you guys are watching this video, then chances are you're either thinking about or in the process of upgrading your clutch, which leaves you with a couple of different options, either resurface your old factory flywheel or upgrade to a new lightweight unit like the McLeod here.Getting into the Chromoly steel versions here from McLeod, now both options again, we do have the 6 and 8 bolt available for you guys here at AM. So whether it's your T56, your 3650 T45, or NT82, chances are we have something to fit your setup. Now both options are priced about the same, both are zero-balanced, and both are SFI certified, so you can use them on your race car. Now that Chromoly steel construction is not only going to be much stronger than the factory flywheel, or even an aluminum flywheel, but it's also going to be considerably lighter than that factory flywheel. And as we all know by now, getting rid of rotational mass is never going to be a bad thing, right? I mean, the car's going to feel much more responsive, rev a little quicker, and you might even make a little bit more power compared to that heavy factory flywheel. Nothing crazy, but it's certainly worth pointing out.Installing the new Chromoly flywheel here from McLeod is something that's going to take a little time obviously because the trans needs to be dropped. But if you are doing this along with a brand new clutch, just figure about three to four hours in the garage just to get everything bolted up. And, as always, if this is something you do not feel comfortable with, don't hesitate to reach out to your local shop. So if you're looking to replace the flywheel in your late-model Mustang with something that's going to be lighter and stronger versus your factory flywheel while at the same time carrying that SFI certification, then be sure to check out both the 6 or 8 bolt options from McLeod here at AmericanMuscle.com.

Chromoly Steel Construction. Manufactured from chromoly steel for extra strength, this McLeod Flywheel features a ring gear of 164 teeth, an engine balance of 0 oz, and an eight bolt main pattern. Steel flywheels are perfect for street and race applications where off the line acceleration is desired.