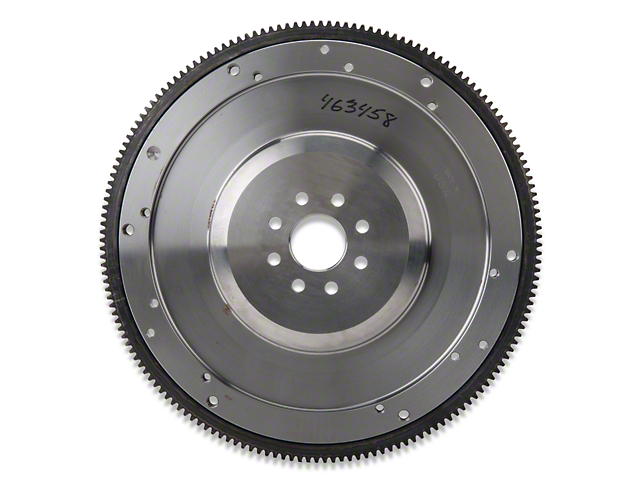 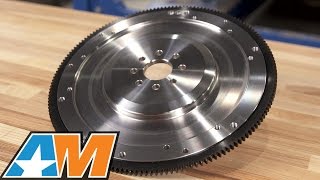 Stephanie: Hey, guys. Stephanie with americanmuscle.com, and this is my review on McLeod's 8 Bolt Lightened Steel Flywheel that's going to work for '96 to '04 Cobras and Mach 1s, '99 to mid-'01 GTs, and '11 to '14 GT and Boss Mustangs. This 8 Bolt Lightened Flywheel from McLeod is going to be for Mustang owners that are replacing their clutch and are looking to replace instead of resurface their flywheel as well. So your two options when you're replacing your clutch are either resurface your old flywheel or go for a new one. And honestly, while you can resurface, I really think it's best to go with a new flywheel by the time you're done paying for resurfacing anyways. Plus the flywheel's really pretty important to the clutch's functioning and can dictate how well it will perform and for how long. So if you're springing for a new clutch anyways, why not give it the best components to do its job to the best of its abilities?So a bit feature about this flywheel is that it's lightened, but I just wanted to address some things with this here. Having a lighter flywheel isn't going to change the actual horsepower of the engine, but if we think of it as rotating mass, in order to accelerate, all of the rotating mass needs to be moved, like your wheels, your driveshaft, your flywheel, all of that. The more that rotating weight is, the more power and RPMs it will take to move those items and get the car moving. The less power that you car needs to speed up the flywheel, the more power available to speed up everything else. So this flywheel isn't going to add horsepower, but it will leave more available horsepower to accelerate the car and get it off the line per se.So, this is a steel flywheel that's going to weigh 20 pounds. This is lighter than the factory flywheel, but it isn't going to be as light as an aluminum flywheel. But when you're shopping for a flywheel and clutch, you really need to understand what you're looking for from these components. There are tradeoffs between going with a lighter or slightly heavier flywheel, so lighter isn't always better. It just depends on the situation.A heavier flywheel is going to be smoother overall, smoother at takeoff, smoother at idle and cruising, but as I explained earlier, a heavier flywheel will mean slower acceleration. This is why this steel flywheel is a good option for street cars and some recreational racing and in general, high performance applications that can see some spirited driving. If you have a car that still sees some street time, but you really want the highest performance possible, then you might want an aluminum flywheel instead as long as your budget agrees with that.Now, getting into a little bit more detail about this one here, it does have 164 teeth on the ring gear. It's neutrally balanced, and has that 8 bolt main pattern. So if you're shopping for a '99 to mid-'01 GT, just check your production date since the mid-'01 has a production date of June of '01. And this is SFI certified for you guys that are planning on using this in high performance or drag racing applications. As far as price goes, you're looking at between $200 and $300 for this flywheel which, like I mentioned before, is less than an aluminum flywheel with cost, and if we compare it to other steel flywheels, we will see that it's on the less expensive side there too even though it's coming from a manufacturer with a name like McLeod.When it comes to the install, it is going to be time consuming, and I would assume that you're going to be replacing your clutch with a flywheel, so we can combine it all into one. I will say that if you haven't really done anything like this before, then it wouldn't be a bad idea to take everything to a shop for this one unless you have someone in the know helping you out. I'll call this one a three out of three wrenches on the difficulty meter, and you're probably looking at about four hours' time if you do decide to tackle this yourself. If you do choose to do this yourself, I would really recommend trying to gain access to a lift. You're obviously going to be dropping your trans, driveshaft and exhaust, so performing this on jack stands could be a little bit difficult and a helping hand with this install could go a long way. You'll need a small range of different socket sizes here and some other miscellaneous tools, but nothing out of the ordinary. Just make sure to have a torque wrench though because you really should be torquing down to spec in cases like this one here. Lastly, just as a side note, don't forget about that clutch break in period no matter who is installing the clutch.Wrapping things up here, the McLeod Lightened Steel Flywheel is a good middle-of-the-road compromise between the heavy stock flywheel and an aluminum flywheel. It's a good option for owners that are looking to keep some of the energy contained in the drivetrain and have a good street driving experience. As always, check this thing out online and see what you think for yourself. I'm Stephanie, and for all things Mustang, keep it right here at americanmuscle.com.

Steel Construction. Manufactured from steel for extra strength, this McLeod Flywheel features a ring gear of 164 teeth, an engine balance of 0 oz, and an eight bolt main pattern. Steel flywheels are perfect for street and race applications where off the line acceleration is desired.

Reviews of McLeod Drivetrain products have an average rating of 4.5 out of 5