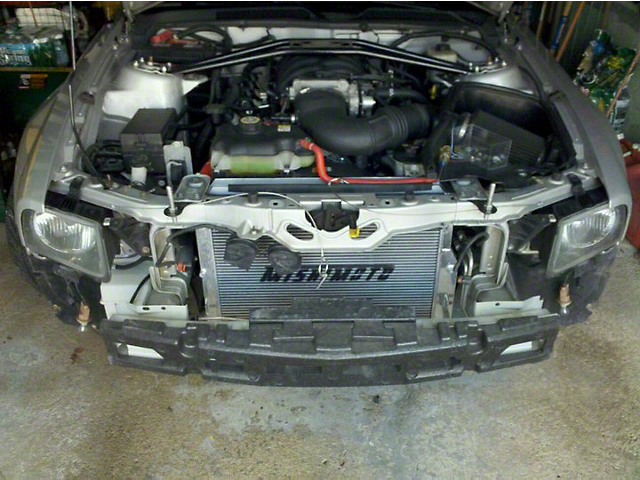 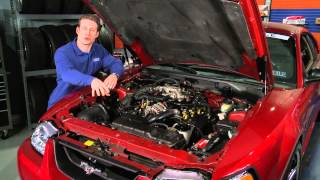 Hey everyone I’m Justin with AmericanMuscle.com and I’m checking out a way to keep your ride cool, all while making a dramatic visual improvement under the hood as well, talking about these Mishimoto performance radiators for your Mustang. Mishimoto has become one of the industry leaders in terms of performance radiators, this direct factory replacement is a great solution for an old or leaking radiator. Now some of our customers have mentioned that this rad has been their cure for their motor running a little hot when adding different performance mods, especially superchargers which can notorious for making any motor run hot. This radiator has been designed to keep your street or strip Mustang much cooler thanks to their unique design, which allows a 25% increase of cooling capacity over your stock radiator. These radiators are manufactured from lightweight aluminum, feature leak proof brass fittings, and are all hand welded to ensure top notch quality, and a perfect fitment. On top of all that they also feature a limited lifetime warranty, no questions asked. The install may be slightly more difficult than bolting up that new cold air intake, but honestly it’s not that bad, think of it as a giant oil change. The first step is you need to drain all the coolant out of the factory radiator, but you want to make sure you have something large enough to hold all that fluid, we recommend at least a 15 quart drain pan. Once you’ve done that, yank the hoses off, then unbolt your factory radiator, removing it from your engine bay. Once you’ve done that, reinstall the Mishimoto in its place, reattach the hoses, and fill it with a 50-50 mix of coolant and water. That’s it, install should take you about 2 hours from start to finish. This would also be a good time to check out Mishimoto’s performance radiator hose kit, not only will they hold up to the heat and pressure better than your stock hoses, but they’ll also make a nice visual improvement under the hood. Every gearhead knows that heat is one of the worst enemies for performance, it can drain power, hurt your fuel mileage, or even damage your motor. So if you want to help your Mustang keep its cool whether it’s on the street or the track, then you’ll definitely want to check out these performance radiators from Mishimoto

View Full Transcript
Keep Cool. Keep temperatures down to keep producing maximum horsepower whether it's on the street or the track with a Mishimoto Aluminum Radiator. When you're running your Mustang hard, engine temps can spiral out of control, draining precious power and even causing engine damage. A Mishimoto Mustang radiator has up to 25% more cooling capacity than your stock radiator to keep things cool and running right.

Lightweight Aluminum. Mishimoto Radiators are crafted of lightweight high-quality aluminum. Each radiator is hand-welded to which ensure a perfect fit and great underhood appearance.

Leak-Proof Design. Other aftermarket radiators have a design problem that causes leakage from the outlet to the overflow reservoir. Unlike other manufacturers, Mishimoto uses specially designed brass fittings to ensure leak-free performance. And all of their radiators are pressure tested twice before leaving the factory so you can install your new radiator with confidence.

AmericanMuscle Recommends. This radiator is a perfect combination with Mishimoto's Silicone Radiator hose kit for your 2005-2012. (Add on option above.)

Technical Note. If you have an automatic transmission, you would need to purchase the required Mishimoto Transmission Cooler from the drop-down ordering options above. May require custom work for proper installation.

Will not fit automatic transmission unless combined with the Mishimoto Transmission Cooler.

Does not fit the Shelby GT500.

Does this radiator require more coolant than the stock one?

does this work with the factory fans? Reuses the factory hoses? I havent seen these questions answered by someone who has bought so I was hoping the company selling them would list this.....

Can you use this with stock radiator hoses?

I have an 06 Saleen S281 with a turbo kit, will this fit even with the front mount intercooler?

Will this radiator work with the factory hardware that holds the fan and the A/C evaporator on? 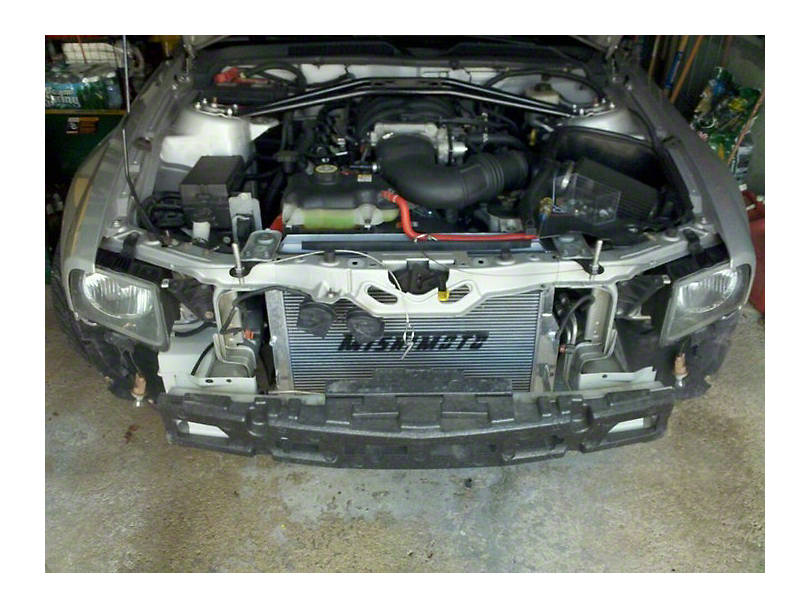