Find Gears for your Mustang 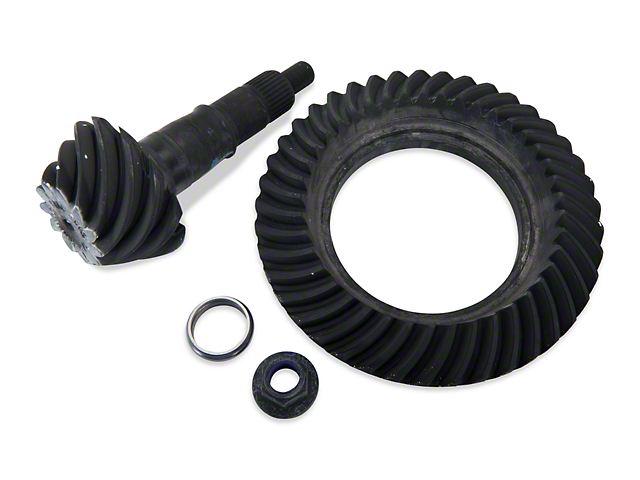 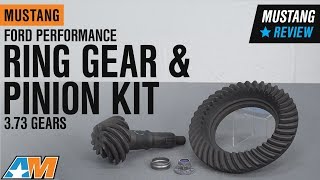 If you're looking to improve the off-the-line acceleration in performance but without adding any horsepower, stepping up to a numerically higher gear ratio is a great way to do so. Now, the Ford Performance 3.73s that we have here will fit the '86 to '14 V8, the '11 to '14 V6 and '13 to '14 GT 500 equipped with the 8.8 solid rear end. Now, this thing will include your ring and pinion as you can see for right around the $150 price point. And the install will not be for the first time mechanics out there as there is quite a bit of work involved to set up a rear end properly, but we will graze over that here in a bit. So, it's no secret that the factory gear ratio for most of the early cars and I'm talking Fox bodies, SN95s and even some of those early S197s wasn't exactly ideal for scorching off-the-line performance and acceleration. In fact, it was quite the opposite. Now, most of these early cars were working with a 2.73, a 3.08 or in some cases a 3.27 but that was pretty much it until some of those later S197s finally ushered in an optional 3.55. Now, with all that said, again a great way to increase the off-the-line acceleration and performance but without bolting on any go fast parts is to install a numerically higher gear ratio or shorter gear as you'll sometimes hear it described as, which will again help get you up to speed and through those gears a little bit faster. The only drawback here, guys, is a slight hit to your fuel economy but with the days of overdrive transmissions, it's not nearly as bad as it used to be on those old school four-speed cars. But getting to the kit that we have here and again with that fuel economy thing in mind, I would argue a lot of people would probably prefer a 3.73 to a more aggressive 4.10 because depending on your factory gear ratio, you're still getting a much shorter gear with the 3.73, especially if you have like a Fox body with a 2.73 for instance and it's gonna feel totally different but without turning a bunch more RPM on the highway while cruising like you would with a 4.10, so overall, guys, it's gonna be a great compromise. Now as far as the physical gears and construction are concerned, well nothing but the best from Ford Performance as you might imagine, strong forge construction, CNC cut all with lap teeth and then finished off in that black oxide coating. The gears have been made in the USA and Ford Performance claims that these are going to be some of the quietest gears available for that 8.8 solid rear axle. But of course, the biggest cause of noise with a new set of gears will be from either poor installation or poor setup. Listen, guys, installing a new set of gears is a bit of an art form and does involve a decent amount of work along with some specialty tools to get everything dialed in properly. So because of that, we are gonna knock this one up to a full three out of three wrenches on the old difficulty meter. Now, if you don't them set up properly, including your proper backlash, your pattern, your depth all that good stuff could lead to a noisy operation as I just mentioned. So, therefore I will recommend most owners out there who aren't prepared to handle this kind of job, take it to your local shop. It's gonna cost you a few hundred bucks, maybe even close to a thousand depending on your area but you'll thank me at the end of the day.But one thing to keep in mind here, guys, is that after a gear install, especially one with a very drastic change, your speedometer will no doubt be considerably off, so, therefore, you will need to correct it. Now '79 to '98 V8 owners can simply replace the speedo gear and that will be the most cost-effective way to go, '99 and newer owners, on the other hand, can either fix it through a handheld device or tuner or you can look into a speedo recalibration box from Ford Performance for couple of hundred bucks. But wrapping things up here, guys. If you're looking to improve your off-the-line acceleration and grunt and work on those VTs a set of 3.73s from Ford Performance would be an excellent choice. And you can grab yours right here at americanmuscle.com.

Improve ET's and low end torque. Are you looking to get more low end grunt off the line and lower ET's at the same time? Then look no further than installing a set of steeper gears in your Pony. Ford Racing Ring and Pinion Gears are perfect for street, road, or race use.Superior Quality. These Ford Racing 3.73 Mustang ring and pinion gears feature a super strong forged construction, CNC cut & lapped gear teeth, and a black oxide finish to resist corrosion.Recommended Upgrade. Changing the rear axle gear ratio will throw off the calibration of your Mustangs speedometer, but a Ford Racing Speedometer Recalibration Tool is an inexpensive way to fix this issue. Application. This Ford Racing Ring and Pinion Gear set will fit all 1986 to 2012 V8 Mustangs including GT, Bullitt, Mach 1, Cobra and the 2011-2014 V6 Mustangs equipped with the 8.8" rear end. A master bearing kit is recommended by most installers, especially on high mileage vehicles, see drop down option above.Attention 2010 and newer Mustang Owners. Starting in 2010 Ford changed the inner rear gear pinion bearing in all 8.8" equipped Mustangs. Because of this you will require a new 8.8" rear gear pinion bearing (Ford part# 9L3Z-4630-A) for proper installation, please see drop down option above.Technical Note. Installation costs will vary, but a good rule of thumb is between $250 and $300. Be sure to work with a reliable shop that you trust for installations. You can also save money on your installation labor by having your Trac-Lok rebuilt at the same time as your gears are installed, see drop down option above.