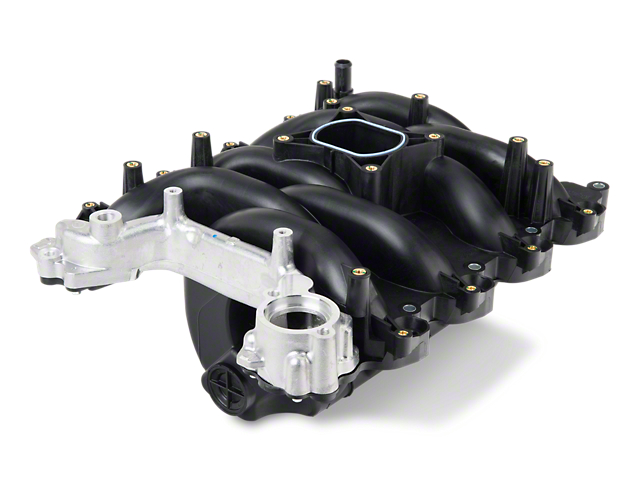 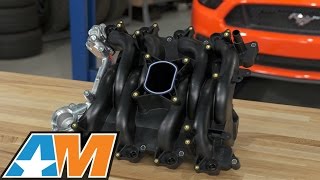 Hey, everybody. I'm Justin with americanmuscle.com and this is my detailed review of the Ford Racing Performance Improvement Intake Manifold available for all '96 to '04 Mustang GTs equipped with PI heads. You should be checking out the Ford Racing Performance Intake Manifold if you've already swapped or plan on swapping over to the very popular PI or performance improvement heads with your two-valve GT, and therefore need a very affordable performance intake manifold solution. This would also be a great option out there for all 2001 to 2004 GTs who may be suffering from a damaged factory intake manifold and are looking for an exact reproduction of that manifold. A lot of you SN guys probably already know, but making the switch over to a set of PI heads is a very popular and very affordable way to get some more performance out of your two-valve GT. The best part is, guys, you can find these PI heads everywhere and for super cheap because Ford use them on a lot of stuff, including the F150, the Explorer, the Crown Vic, and of course, the Mustang. Those PI heads were introduced back in 1999 and were immediately a huge improvement over the non-PI heads in many different aspects. The heads float a lot better than the factory non-PI heads, they had a much hotter cam, and the combustion chamber was actually reshaped slightly, raising the compression ratio in the process. Altogether, this all resulted in a pretty substantial bump in power. How much power exactly? Well, non-PI head equipped two-valve GTs are putting down and advertise 210 horsepower. With the PI heads, the car was now making 260 horsepower. So again, a big jump in power. The totally redesigned heads and that hotter cam, Ford had to totally redesign the intake manifold to keep up with that better flowing top end and that's the intake manifold we're looking at here today. Again, guys, this is the same exact manifold used on all 2001 to 2004 4.6-liter Mustang GTs making it a Direct Bolt-On as you might expect. This pretty much is still a Direct Bolt-On from 1999 and 2000 GTs. However, you will need one additional part, basically an alternator bracket, but that's about it. I do want to point out guys that you can actually use this intake manifold on non-PI Heads and still get a nice gain in power, although some additional work is necessary. It's really not as bad as you might think. You just need a set of the PI gaskets to go in between the manifold and the heads and you will need to get some gasket maker to go around one of the mismatched water jacket areas. It might sound a little shady, but honestly it's not as bad as you think. In fact a lot of people do it with great results. Ford Racing Intake Manifold has been constructed from a black composite material and features an aluminum cross over here as you can see. It has an effective RPM or operating range from basically idle to about 6000 RPM. Now, there are better options out there for higher revving engines. So maybe if you are planning on building a nasty all motor set up using a big cam, you'll want to turn a higher RPM. You might want to check out the Victor Junior from Edelbrock as opposed to this intake manifold here. I do also want to point out that you can use aftermarket throttle bodies and aftermarket intake plenums with this intake manifold from Ford Racing. In fact, it's something many of our customers have done and they've reported great success in doing so. Feel free to read up on the 100-plus five star reviews on this product back on the product page. You just might get a little better idea of what to expect when installing. On the topic of price, guys, again, I think you'll find this to be one of your more affordable options when it comes to your two_valve GT or aftermarket intake manifold, especially when comparing to some of your other options here on this site, landing you right in the mid-$200 range. Now, your install is definitely going to differ here guys depending on your year, of course, and also depending if you plan on doing this intake manifold swap along with the head swap or if you're just going to do the intake manifold by itself. Regardless, before you get started with the install, make sure you get a fresh set of gasket from the intake manifold to the head and also don't forget a fresh thermostat gasket along with some fresh coolant. This one will definitely test your tool box a little bit. So just make sure you have a decent set on hand before getting started and also you're going to want to make sure you have something on hand to catch the coolant when you do make the swap. Now, if you're doing just the manifold by itself, I'm going to say two out of three wrenches on the difficulty meter, really not too bad here. But if you are doing this with the full head swap, it's going to raise it to a full three out of three wrench job. Overall, guys, just leave yourself a few hours in the garage guys or driveway to get the manifold in place. The Ford Racing Performance Improvement Intake Manifold is a great performing, budget friendly intake manifold for all SN owners out there with PI heads and even those without as we talked about a little bit earlier. So be sure to check out an option for your two valve-GT right here at americanmuscle.com.

Perfect for PI Head Swap. This is the same exact production Intake Manifold used by Ford on the 2001 to 2004 4.6L SOHC 2V V8 GT Mustangs. It is less expensive and a great alternative to high dollar aftermarket performance intake manifolds when performing a PI head swap on your Stang.

Application. This Ford Racing Performance Improvement (PI) Intake Manifold is a direct fit on 1999-2004 4.6L GT Mustangs with PI head ports. It can also be used on 1996-1998 4.6L engines with PI heads, with additional parts and modifications required.

Reviews of Ford Performance Intake products have an average rating of 4.7 out of 5

1996-1998 Mustang do not have PI Heads from the factory, will require PI heads for proper fitment 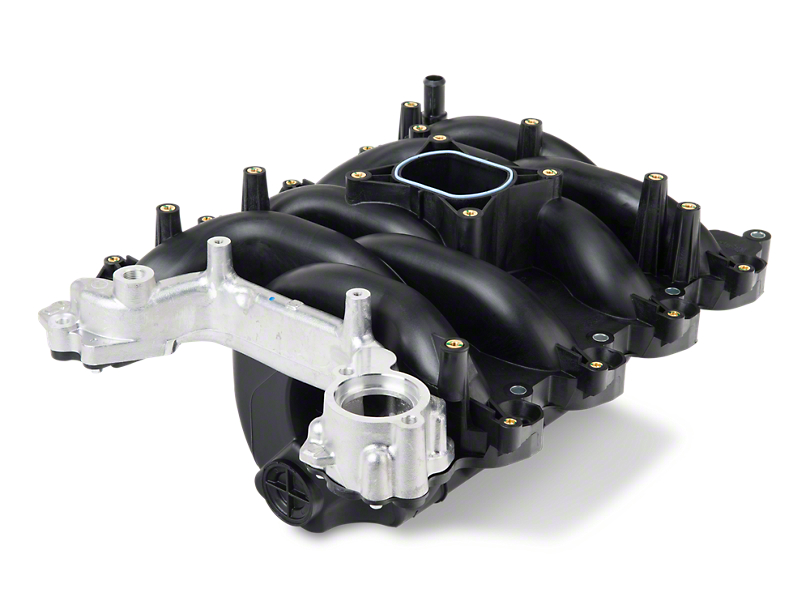