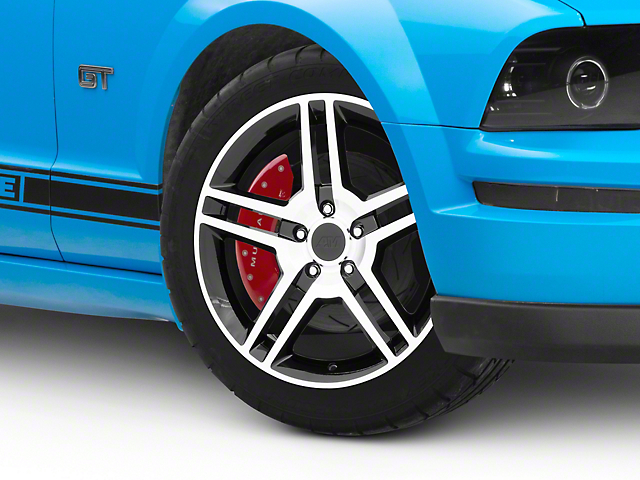 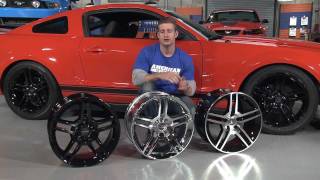 Popular Tire Sizes for this Wheel

Picking your own tires? Choose addons below to complete your own wheel & tire kit

Please select wheel options above to add to cart

Choose recommended tires that will fit these wheels

In Stock
Sorry, please enter a valid US or CA postal code
We're sorry, zip can't be updated at this time.
Add to Cart
In Stock
View Open Box Items
Save for later
Create a list
Add to New List

Hey everyone, I’m Justin with AmericanMuscle.com, and I’m taking a look at our AmericanMuscle GT500 Style Wheels for your 2005 and up Mustang. GT500’s have always been one of the baddest Mustangs on the block and now your ride can enjoy the stylings of the 2010 GT500, thanks to these split 5-spoke wheels. The wheels are available with 3 different finishes, including a black painted finish, a triple dipped chrome finish, or a black machined finish. As for the sizes, the wheels are available in either an 18” diameter with an 8 inch front and 9 inch rear, or a 19” diameter with an 8.5 inch front and a 10 inch rear. Staggered fitment is cool for a couple of different reasons. First off, it looks awesome. A wider rear wheel not only improves your stance, but also helps get that power down to the ground thanks to the wider rear tire and contact patch. Not only that, it also makes for more responsive handling as well, thanks to the narrow front tire. It’s a win-win. Now, you can purchase these wheels without tires if you want; however, the smart move would be to take advantage of one of our wheel and tire combos that pair your new GT500 style wheels up with some of the better performing tires on the market today in sizes that are guaranteed to fit without rubbing, even if you’re lowered an inch or two. Not only that, you also get to take advantage of our free shipping and handling, free mounting and balancing, and optional nitrogen fill. Remember, you 2007 and up folks have to keep in mind your vehicles are equipped with a TPMS sensor. This means a tire pressure monitoring system that needs to be addressed when ordering new wheels. These aluminum AM wheels are extremely durable, but if you ever encounter any problems, every rim features a lifetime structural warranty, as well as a one year warranty on finish, you can’t beat that. There are very few mods on the market today that can change the attitude of any ride like a new set of shoes. These AmericanMuscle wheels are sure to offer the modern aggressive stylings that look great on any Mustang.

Modern Shelby Styling. Now you can have the modern split spoke styling of the new 2010 Shelby GT500 Cobra for your very own Pony. These 2010 style GT500 rims look great on all Mustangs, they feature a split 5 spoke design and a European style flange-less lip for awesome sleek styling.

Sharp Machined finish. The velvet smooth look of machined aluminum makes an intense contrast against the black inlays on this wheel for an incredibly sharp presentation.

Note: The stock lug nuts (13/16”) prove to be too large when used in conjunction with these wheels. Please take a look at the Lug Nut Ordering Options above for some compatible options.

Mounting & Balancing: AmericanMuscle offers professional mounting and balancing on all wheels and tires when purchased together on the same order. This will allow you to swap out your old wheels for your new set when they arrive.

What is TPMS? The Tire Pressure Monitoring System (TPMS for short) is a factory installed safety feature on all 2007 and newer Ford Mustangs that alerts you when your tire pressure drops to an unsafe limit.

How do I keep my TPMS feature? Aftermarket wheels do not come with TPMS sensors. However, if you select 'Add TPMS Sensor Kit' and your specific year range from the options listed above, we'll install the TPMS Sensors in your new wheels!

For more Information, check out TPMS Sensor Kits or TPMS Tool in detail.

I'm getting 235/50-18 snow tires, will these rims fit without any problems, or will they be too wide for the tires?

My 07 mustang is lowered 1.5" will these tires and rims stay with in the wheel well or will the stick out some or rub the fenders at all?

What is the hub bore for these wheels? I want to put them on a car with a 70.5 mm hub and was wondering if they'll fit. 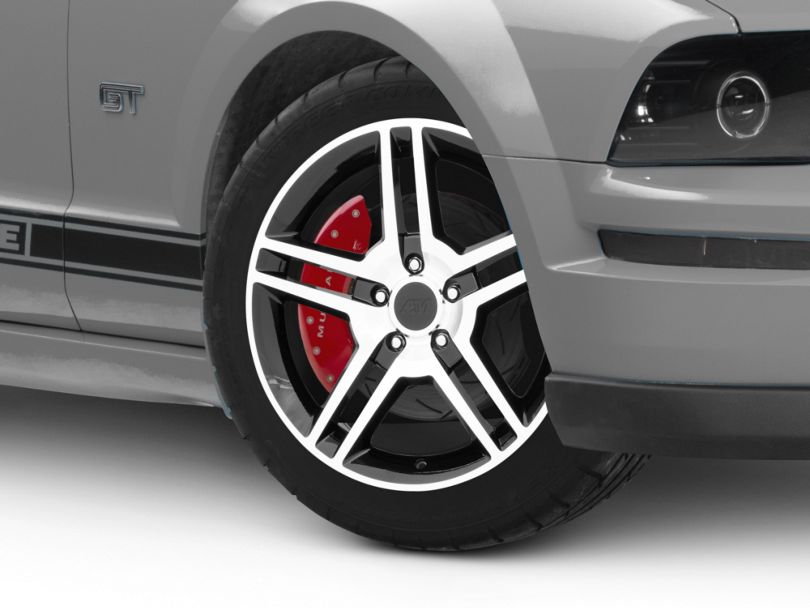